Lyme Disease is a bacterial disease transmitted by the bite of an infected tick.  The Black-legged or Deer Tick is a known carrier of Lyme Disease in the northeast and north central United States.  Not all ticks carry disease, and a bite of a tick does not always result in the development of Lyme Disease.  Ticks generally need to be attached for 36 to 48 hours before they can transmit Lyme Disease.

Symptoms
Symptoms of Lyme Disease vary greatly from person to person.  The diagnosis may be delayed because in the early stages, the symptoms are so similar to the flu and mononucleosis, and many people do not realize that a bite even occurred.

Early Stages of Lyme Disease
Lyme Disease usually appears 3 to 30 days after exposure to an infected tick.  The symptoms may include:

The "bull's eye" rash occurs in about 60% of the cases and may appear 3 days to 32 days after the bite.  The rash is typically warm to the touch, but not painful. 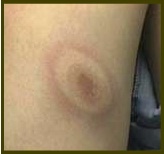 Late Stages of Lyme Disease
The following symptoms may not appear until weeks, months or years after a tick bite:

If you experience these symptoms, and have had a possible exposure to ticks, contact your physician.