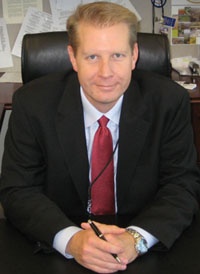 Peter Austin has served as the McHenry County Administrator since 2005. Mr. Austin’s duties include overseeing more than 1,200 County employees and preparing the County’s annual operating and capital budget totaling more than $240 million. He is responsible for managing the cost-effective delivery of county services for more than 300,000 residents. He coordinates the implementation of County Board policies, ordinances, regulations and resolutions. As the County Administrator, Mr. Austin is accountable for organizational efficiency, day-to-day operations, and achievement of the County Board’s strategic goals.

He received the Donald C. Stone Practitioner Award for his contributions towards intergovernmental accomplishments from the American Society of Public Administration in 2015.

Mr. Austin received his Bachelor of Arts in Economics from the University of Iowa in 1992, and Masters in Public Administration from Northern Illinois University in 1994.

He and his wife, Jen, have lived in McHenry County since 2005. They have a son, Andrew, and a daughter, Anna.
View Full Site