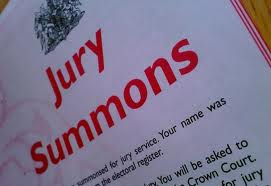 This a description of the responsibilities and duties of jurors in McHenry County, Illinois. These are rules for jurors. If jurors continue to obey them, then we can operate the Courts as efficiently as possible and meet all the requirements for impartial juries. Also, we can maintain the security of those citizens serving as jurors.

Do not make an independent investigation.
Jurors are expected to use the experience and common sense they possess, but are not to rely upon private sources of information. Therefore, jurors should never inspect the scene of any occurrence involved in a case except under supervision of the Court. The jury's verdict can only be based upon the testimony heard and evidence viewed in the courtroom during the trial.

Do not talk to participants during the trial.
Do not talk to any of the attorneys, parties, reporters or witnesses about anything. It may be only a comment on the weather, but if seen by people who cannot hear what is said it may be misunderstood. It is better to say nothing.

Do not discuss the case during the trial.
Jurors are not to discuss the case among themselves until the testimony is complete and deliberations have begun. It would be unfair to the parties, the other jurors and the juror himself to reach conclusions or influence each other before all the evidence has been presented.

During the trial the juror must not discuss the case with friends, family or others. The reason for this is that a juror must base his/her decision only upon the evidence. The opinions or comments offered by others are not proper evidence in the case. If a juror is asked to discuss the case by persons outside the courtroom, the juror should say that the law does not allow me to do so. If anyone persists in discussing the case or tries to influence a juror in any way, it is the juror's legal duty to report this to the judge right away. A juror should avoid newspapers, radio, internet and television programs that may feature accounts of the trial or information concerning one of the people in it.

These media reports may be biased or incomplete and are not evidence.

After a juror is released they may discuss their experiences with the attorneys, investigators, or other persons. Please be aware, that jurors are not required to do so, and the choice is up to the individuals themselves.

The Stages of Trial:

After the jury has been selected and sworn, the trial of a case proceeds as follows: 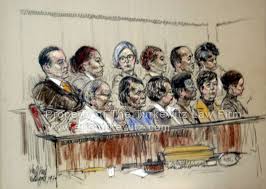 Following the opening statements, the attorney for the plaintiff presents evidence. Thereafter, the defendant may or may not choose to present evidence as he or she sees fit.

Evidence falls into two classes -- testimony and exhibits. TESTIMONY consists of statements made by witnesses under oath. EXHIBITS are physical objects such as photographs and written documents. The examination of witnesses by the party calling them is direct examination. Each party has a right to ask questions of the other party's witnesses. This is cross-examination. Jurors are not permitted to question witnesses, unless granted specific authorization by the judge.

Since a juror must base the verdict on the evidence, a juror should hear every question asked and the answer given. If the juror does not hear some of the testimony for any reason -- they should advise the Court. Jurors are entitled to take notes in accordance with the directions given by the judge.

Rules of evidence have been developed through the years so that we may have fair and orderly trials. When a question is asked which either attorney believes is in violation of these rules, he or she has a right to object to the question. The judge then decides whether the question is to be answered by the witness. A ruling by the judge does not mean he or she is taking sides. The judge is deciding that the law does, or does not, permit the question to be asked and answered. Jurors should not be prejudiced for or against one side of the case because of objections made by an attorney. At times the jury may be excused from the courtroom while objections are being discussed, or for other reasons. Under the law, various matters must be heard out of the presence of the jury. When a trial is necessarily interrupted for these reasons, the juror should not feel that their time is being wasted.

Conduct in the Jury Room:

Upon going to the jury room for deliberation of the case, the jury panel must select a foreperson. The foreperson acts as chairperson. It is his or her duty to see that the discussion is carried on in an orderly fashion and that every juror has a chance to say what he or she thinks. A good foreperson can keep the discussion in due bounds, can save much time and can secure efficient results.

Any communication outside of the deliberation room will be with a Court Security Officers, who will relay questions to the judge.

Upon reaching a verdict, the jury will inform the Court Security Office, who will notify the judge and all of the involved parties. Court will reconvene and the jury will render its verdict in court.

Upon conclusion of a jury trial, the juror's term of service will be complete.