A wave of applications for conditional use permits for solar farms have come to McHenry County, mostly in the unincorporated territory, but also within municipalities.

The first solar farm firm met with County Zoning officials in June of 2017 just as the Future Energy Jobs Act became effective. According to the Energy Law Report (May 2017):

"The Future Energy Jobs Bill (SB 2814) was enacted into law on December 7, 2016, as Public Act 99-0906, with an effective date of June 1, 2017 (the “Act”). The Act calls for updates to Illinois’ renewable portfolio standards, net metering, and energy efficiency standards, as well as a new zero emissions credits plan. Under the Act, the Illinois Power Agency (the “IPA”) is charged with developing various plans and the utilities are charged with collecting and distributing funds and entering in to contracts for the procurement of emissions credits. This summary is focused on the Renewable Portfolio Standard, the Initial Forward Procurement, the Long Term Procurement Plan, the Zero Emissions Standard, and Net Metering. The Act also includes significant energy efficiency, job creation, and training provisions... "

The first application for a solar farm was submitted to the County in February 2018 and reached the Zoning Board of Appeals (ZBA) at the beginning of April 2018.  As of mid-April 2019 the County has received 31 petitions for solar farms. Twenty-five have been approved by the County Board;  two were withdrawn;  and four were denied.

Here is a photograph of a typical solar farm installation—— 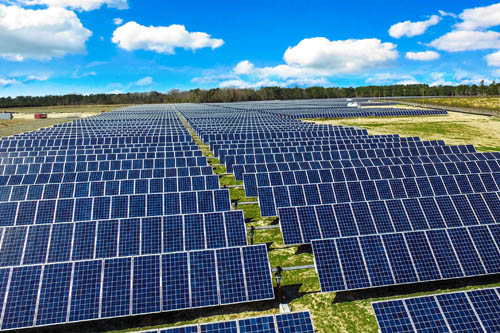 « Return to the Planning and Development home page «